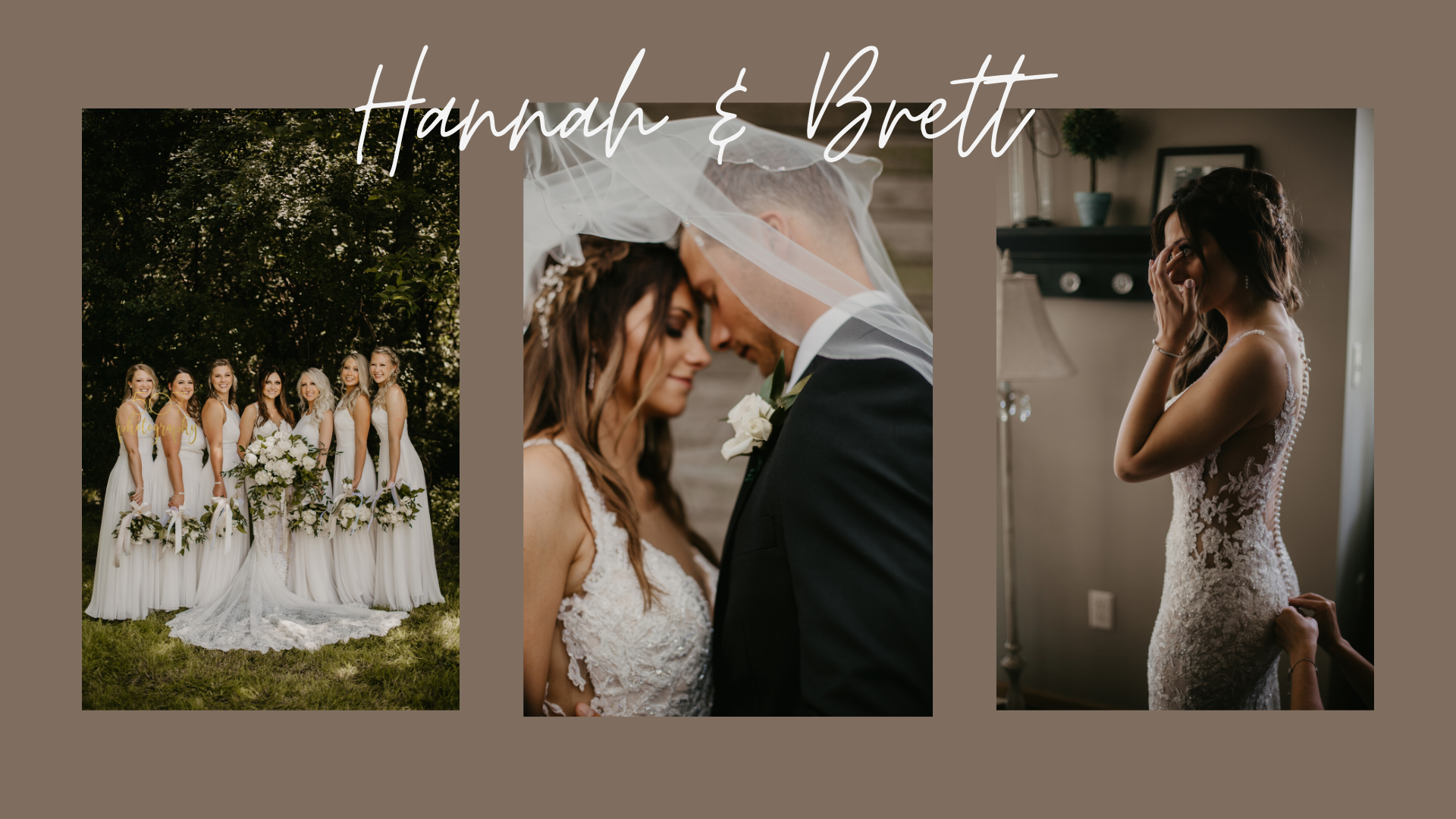 June 29th at The Mill Event Center in Waseca, MN was an effortlessly romantic and beautiful wedding day for Hannah and Brett! Their love story is just as beautiful as their wedding day. Here are all the stunning details brought to you by the bride herself. 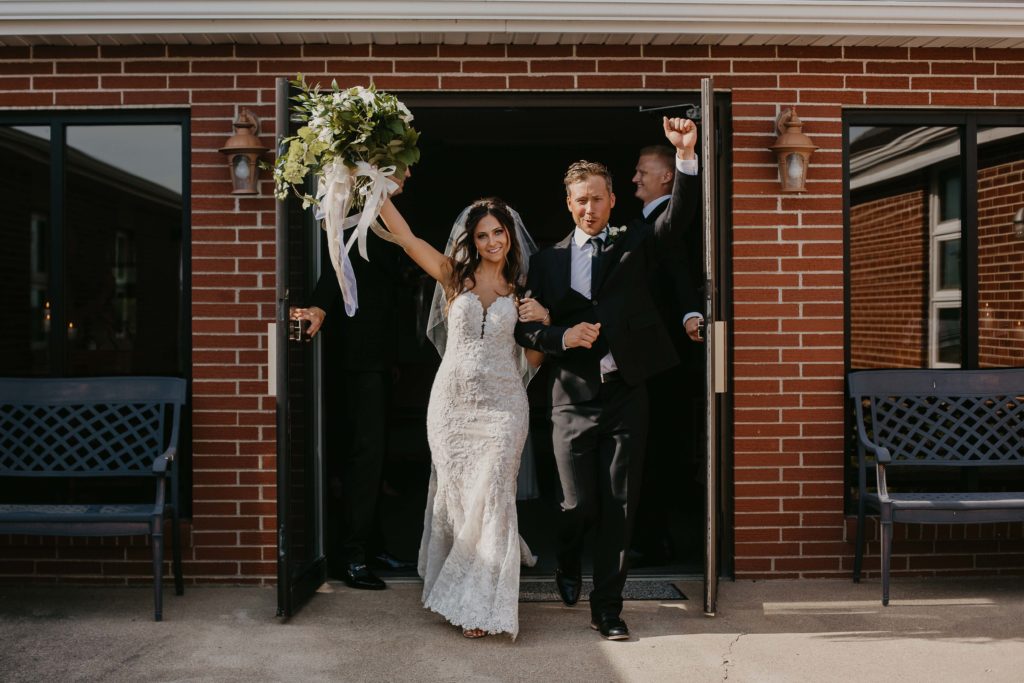 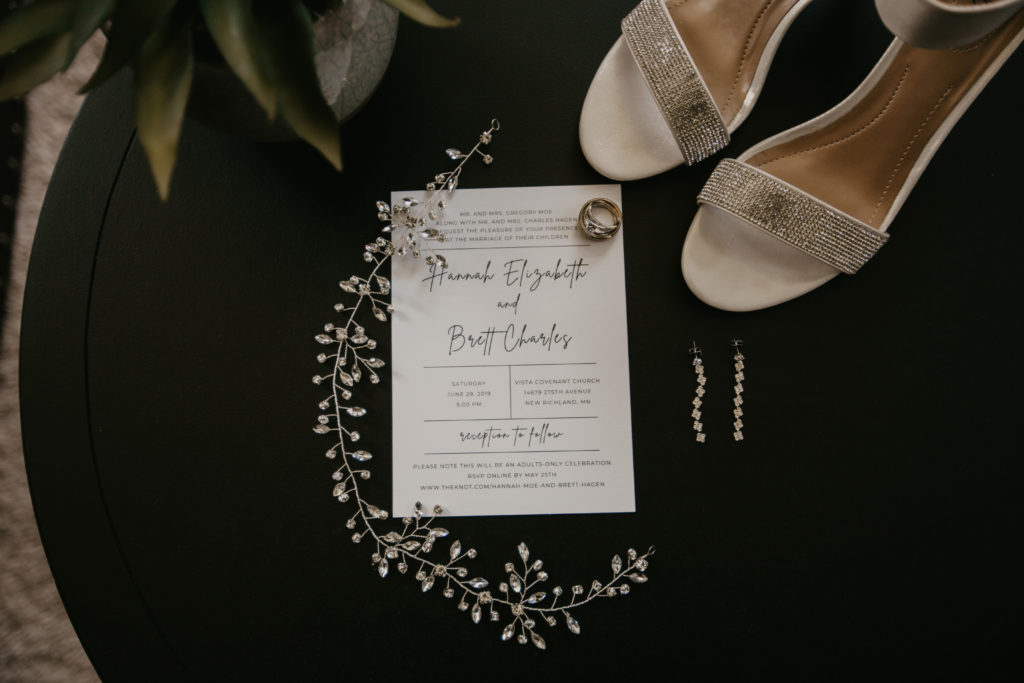 We both grew up in the New Richland area, and attended the same school (NRHEG). Being in such a small school, we knew of each other, but never talked until I was in high school! When I was in 10th grade, it was my first year as a football cheerleader, and Brett was 11th grade on the football team!Â  The other girls I cheered with were close friends of Brett.Â  Early in the season they said “You and Brett should date!! Is it okay if we give him your number?!” It wasn’t much longer and we started talking, later on went on a few dates to the movies, our first prom together, and in June we became “official”!!

We always had that feeling that we were meant for each other.Â  Dating for many years, everyone would always ask us when would we be getting married! But we felt so young, even though we always knew one day we would get married. Just wasn’t the right time! Until March 2018 came around….. :) 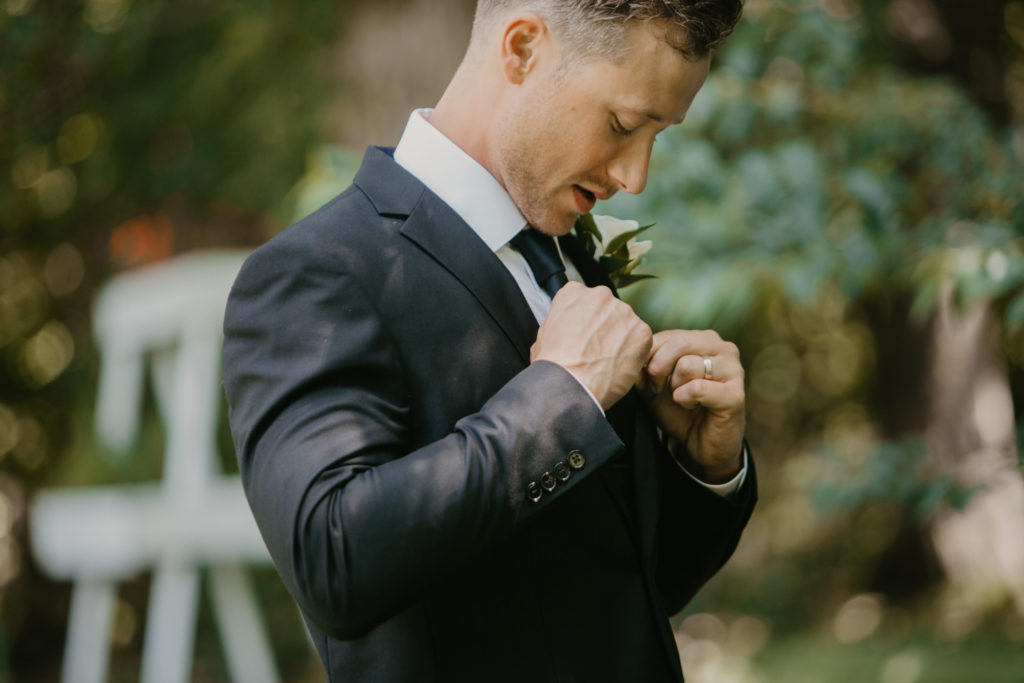 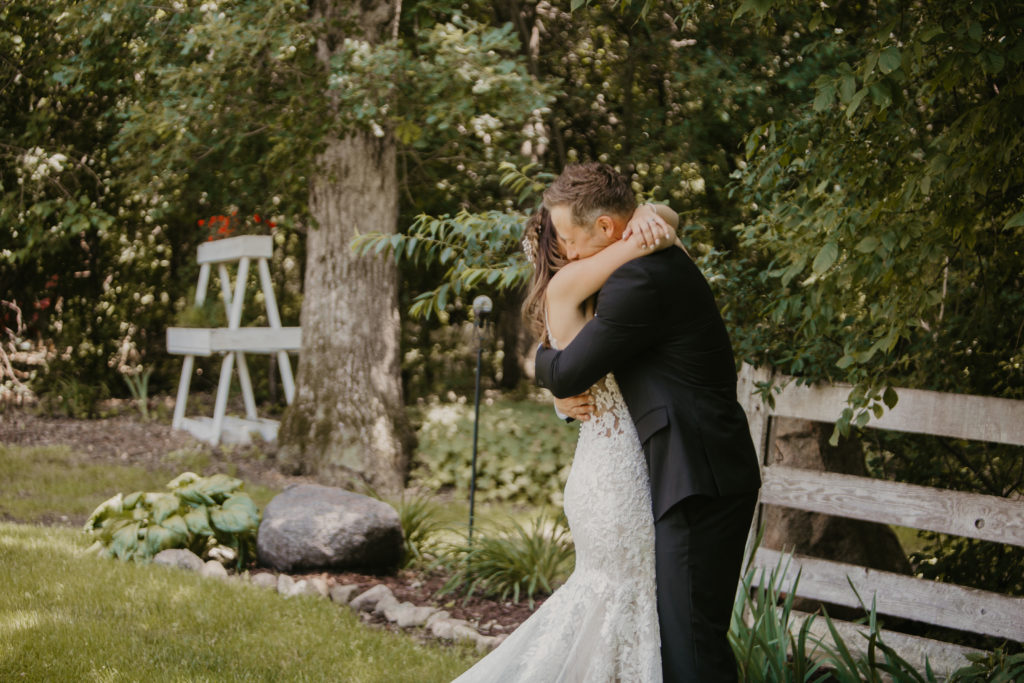 In March 2018, we were vacationing to Cabo San Lucas, Mexico with my family.Â  We were going to be there over my birthday, so I was kind of wondering if maybe.. Brett would be proposing on that day (we were dating almost 9 years)!Â  He had a different plan! The day before my birthday, he tried to wake me up to go for a walk on the beach during sunrise. Lets just say, I am not a morning person.Â  But I do love a walk on the beach! So I said no, let’s go after lunch.Â  Later on when we were leaving for our walk, I asked if anyone else wanted to come with and they all said no.Â  I didn’t think anything of it though! Brett and I got a Mojito and went on our walk.Â  It was a very hot day, and he would say we need to take a break probably close to five times! I was determined to get to a certain distance so we just kept walking. Brett was probably so nervous!! When we finally took our break on the beach, I just remember standing there looking out at all the cruise ships and parasailers out in the ocean. Then I turned and saw Brett digging around in his backpack, and out comes a RING!!! He got down on one knee, asked me to be his wife, and of course I said YES!!! It was like a dream! Just after he proposed, a girl was running by so she stopped and took our picture for us too! We couldn’t wait to tell our families and friends! The rest of our vacation was just a big celebration!! 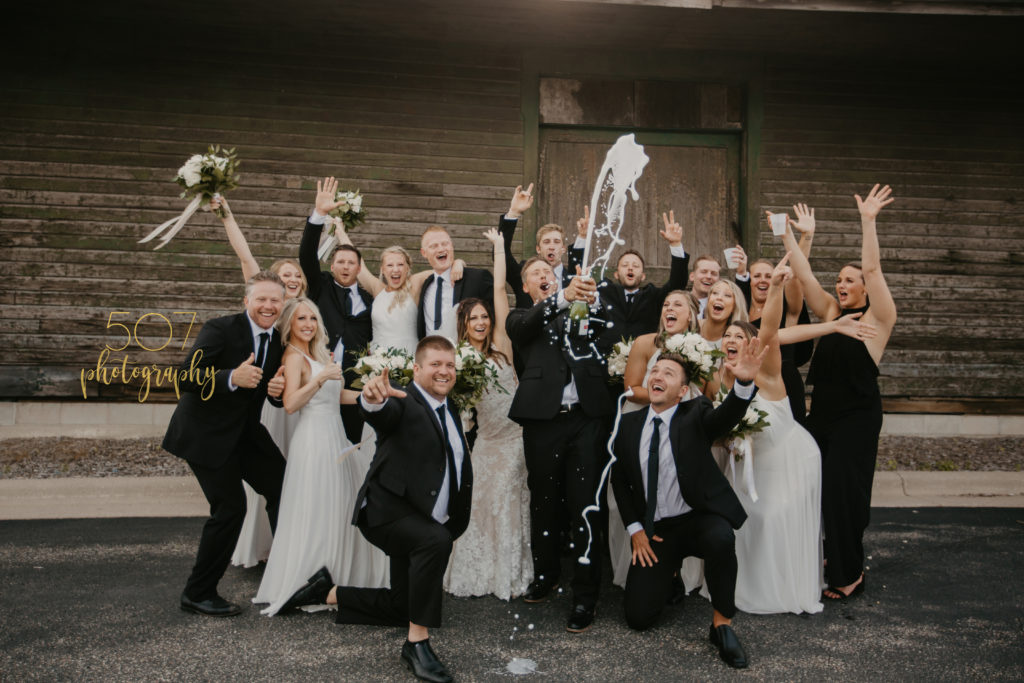 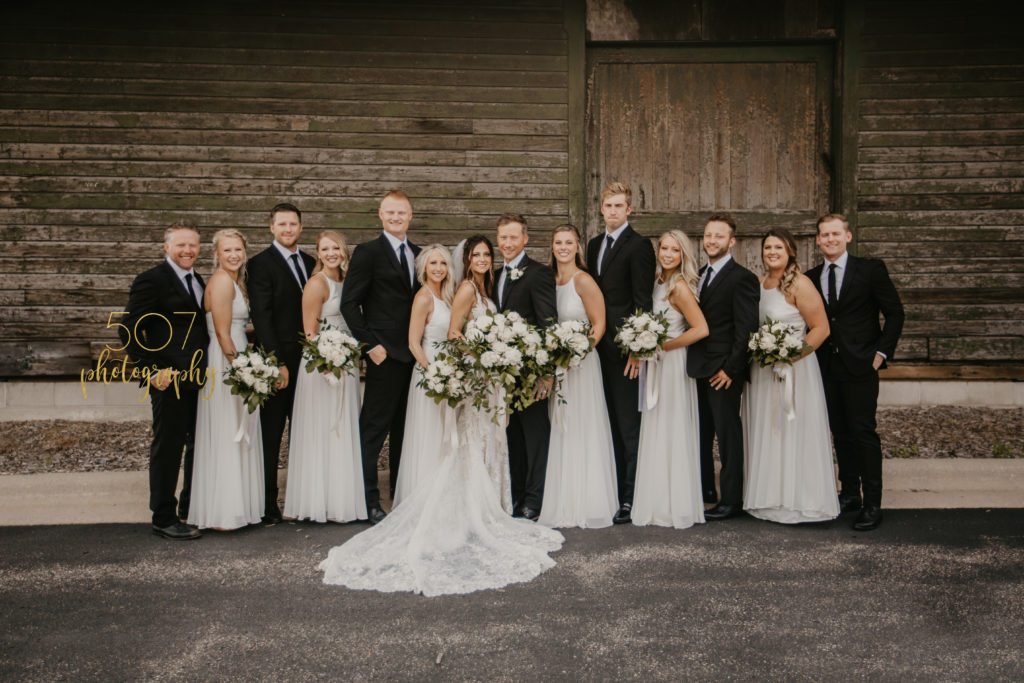 (Before the proposal: Funny story!) As we were at the Minneapolis airport, Brett got taken aside by TSA because they had to search his backpack for a “sharp object”.Â  Ended up being the engagement ring!! They took it out and had to look it over! Brett had to tell the lady that he was going to be proposing to his girlfriend, so don’t wave the ring around! I was waiting just outside the security checkpoint, and I could see he looked flustered as they searched him.Â  Brett thought he almost needed to propose right there!!Â 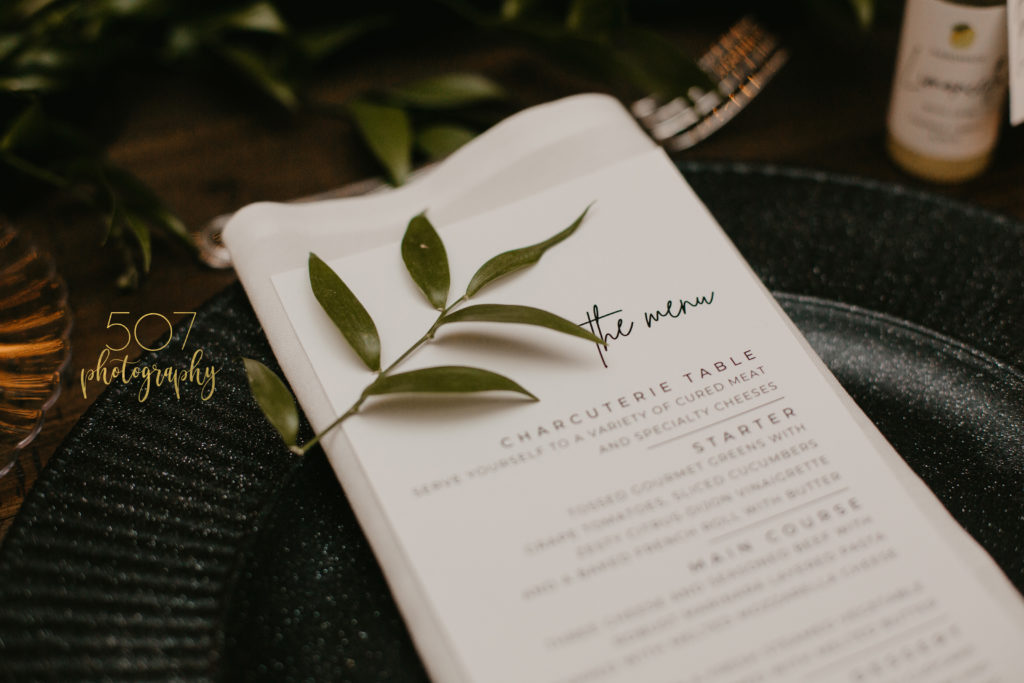 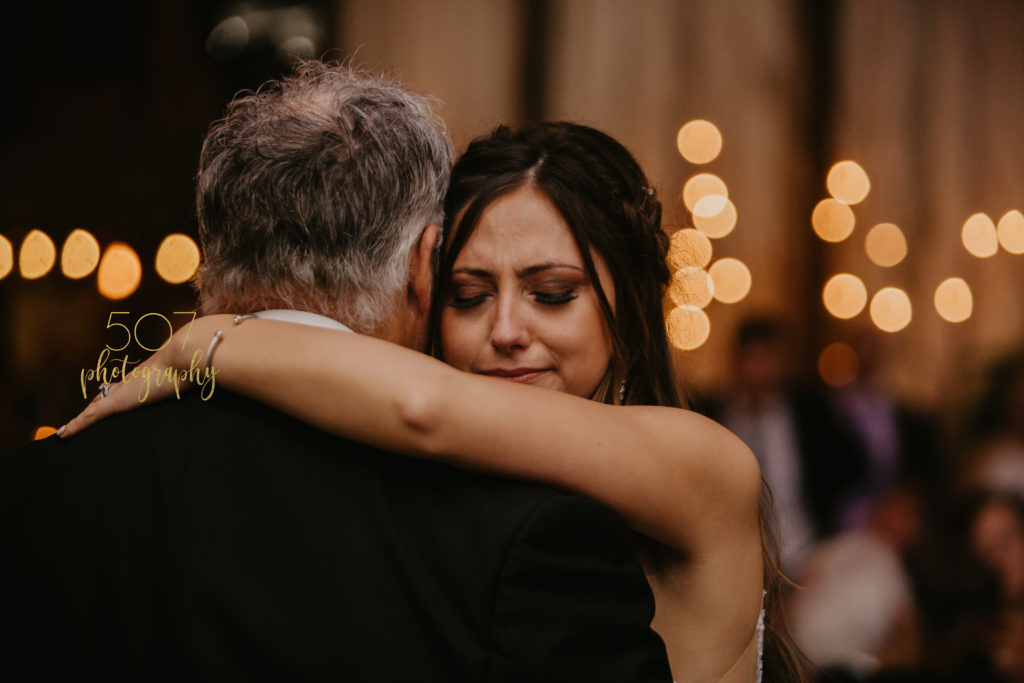 Our wedding day was absolutely perfect.Â  The theme we were going for was “Romantic Italian Garden”.Â  The church was like a fairytale. There were real trees down the aisle, with tea light candles hanging from the branches, and white lanterns down below.Â  The Mill Event Center was the perfect venue for our special day.Â  It is spacious for a large group and the lighting they have set up already is breathtaking.Â  We were able to do our own decorating as well!Â  There were lanterns scattered around, wine barrels, and lots of beautiful white flowers and greenery throughout the venue.Â  A favorite of ours and the guests was the nine foot long Charcuterie table during the cocktail hour. Continuing our Italian theme, we had lasagna for dinner followed by tiramisu cupcakes.Â  As the guest name cards, we used mini bottles of Limoncello; which is an after dinner pallet cleanser.Â Â

The wedding dance was the best time ever with Good For Gary!! They sang our first dance song “Heaven” by Bryan Adams, and then for our father/daughter mother/son dance they ended up learning another song “Stand By Me” by Skylar Grey.Â  After that, they got the party started and people were up dancing until the very end of the night! It was so much fun to get to celebrate our wedding day with family and friends that are so close to us!Â

The week of our wedding, was our 10 year dating anniversary!Â

I thought it would be fun to pop a bottle of champagne INSIDE of the house after getting ready, just because of a picture I saw on Pinterest! Champagne sprayed everywhere. I had bridesmaids that got soaked in their robes, and my hair got wet! Luckily I work in a salon, and my manager was doing my hair for me. We joked that champagne would be a good “setting” spray for curling hair since it has some stickiness to it. *I recommend not shaking the bottle before opening! 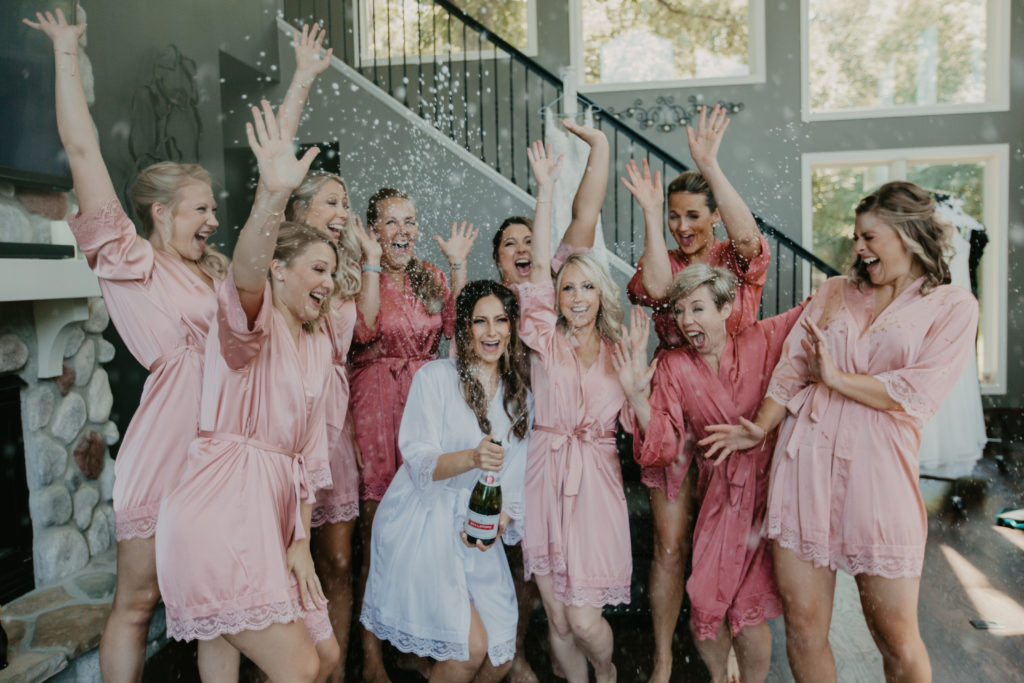 Two days after our wedding we left for our honeymoon in Aruba!Â  We stayed at the Barcelo All Inclusive Resort and spent a lot of time on the beach just getting to relax after all of the wedding planning!

We are so thankful for all of our vendors, family and friends that made this day so special for us! 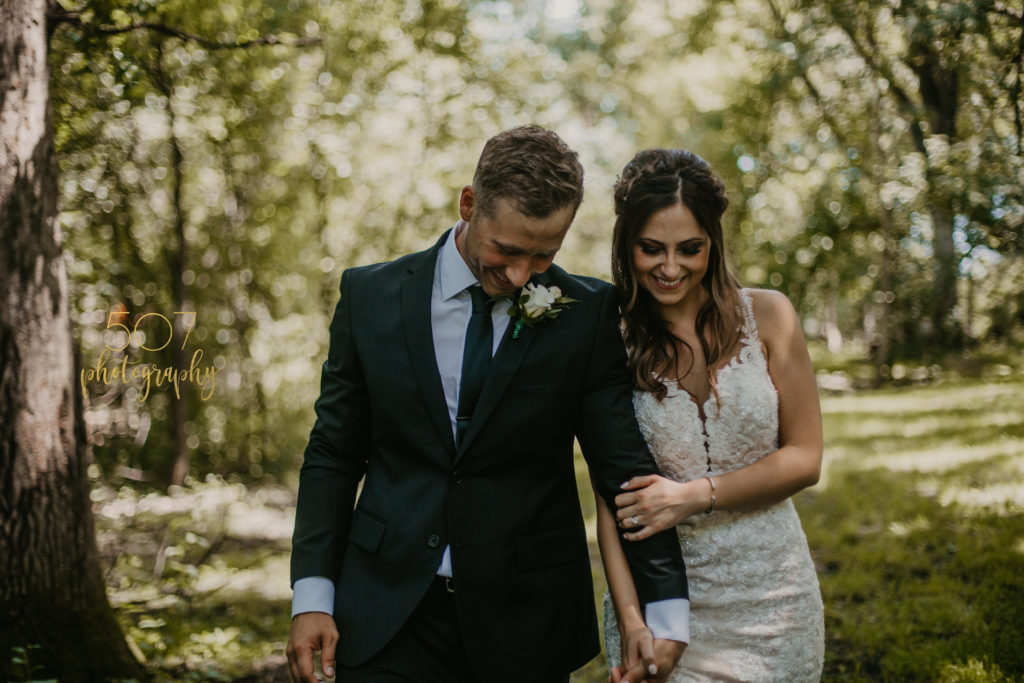 We thought spring was right around the corner, but unfortunately, as I'm writing this, it's…

Our New Arrival Event starts TODAY! We are so excited about all the new gowns…

October 9th, 2020 couldn't have ended up more different for Kelsey and Chris to get…

Please call ahead for an appointment
with a bridal consultant