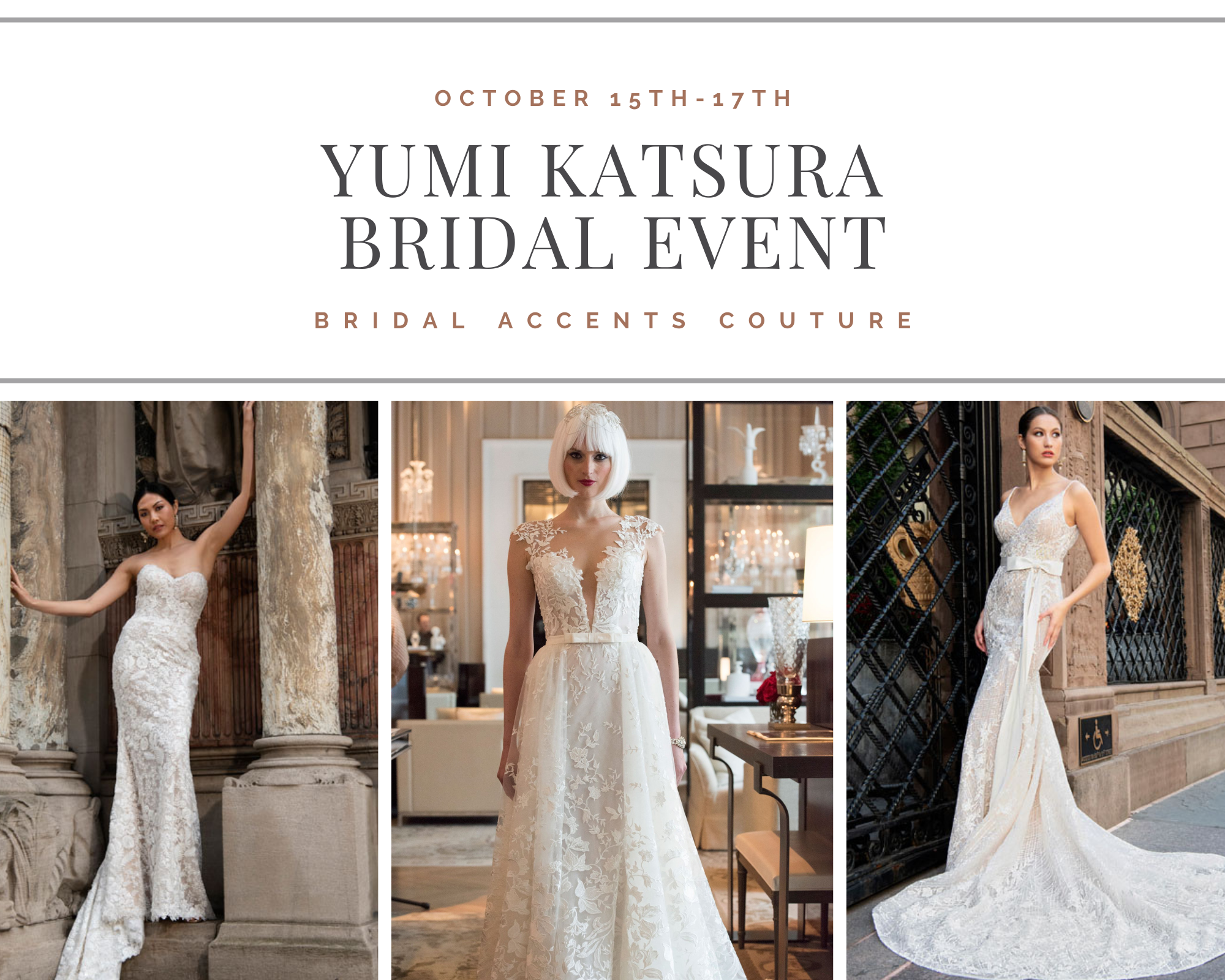 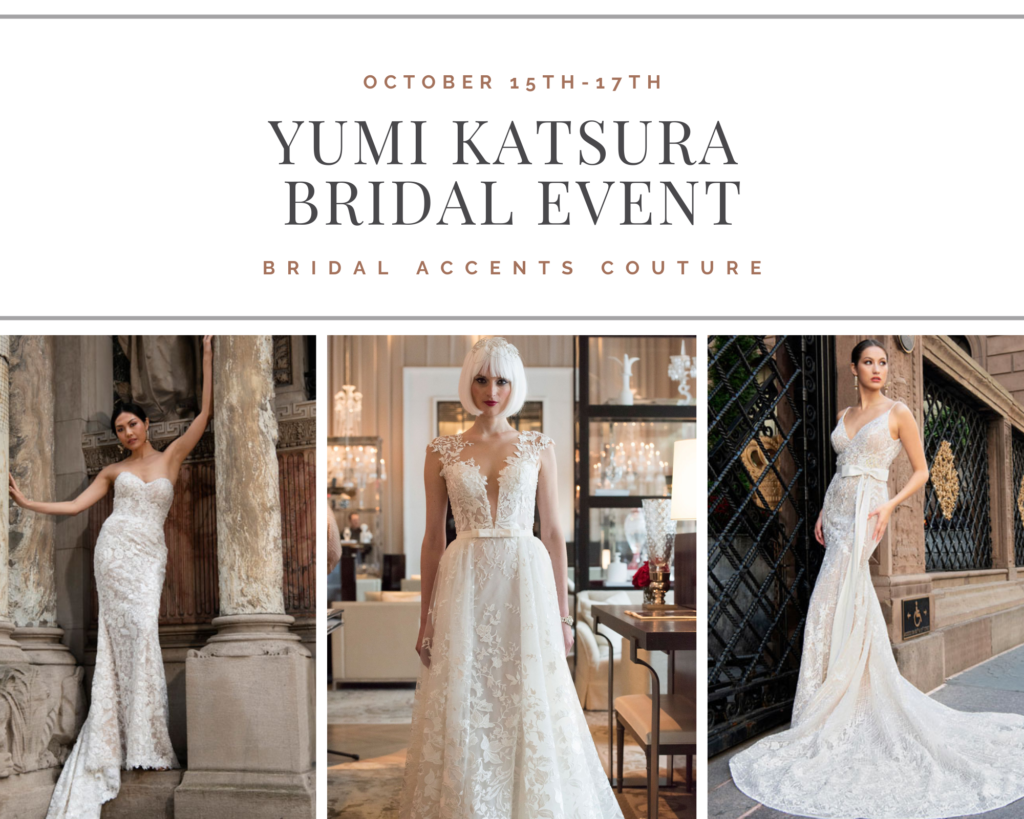 We are so excited to announce our Yumi Katsura Designer Event will be happening October 15th-17th! Read on to hear about Yumi Katsura, as well as highlights from an article by National Bridal Market Chicago featuring Yumi Katsura’s Lead Designer, Paulette Cleghorn!

In 1964, Katsura opened her first bridal salon, as well as presented the first bridal collection show ever held in Japan. Not too long after opening the salon, Yumi Katsura published “The bridal Book,” the first Japanese book specializing in bridal fashion. In 1981, Katsura expanded her business into the U.S., France, and England where she participated in the Japan Fashion Fair. Some of the most exclusive stores in the States, such as Saks Fifth Avenue, Bergdorf Goodman, Henri Bendel and Neiman Marcus, purchased her dresses.
In 1988, the Yumi Katsura Bridal Museum was established in Kobe. The museum exhibits authentic traditional bridal gowns from all over the world. 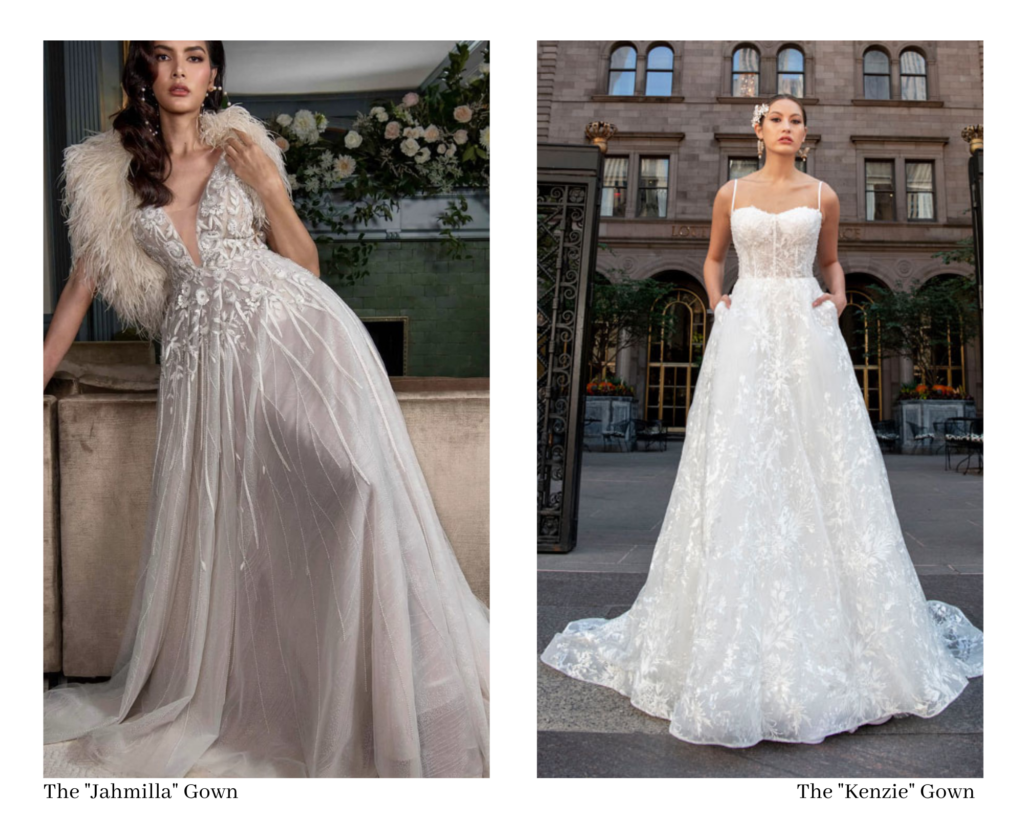 Over the next six years, Katsura worked on her next big project, & finally opened the Yumi Katsura Bridal House New York on Madison Avenue in New York City. Yumi Katsura has been the recipient of various awards throughout the years. Such awards include the triumph of Fashion Award, Foreign Minister’s Award, The Wedding Garment for the New Generation Award, The Dalian Honorary medal, and became the first Asian member of the Haute Couture of Camera Nazionale Della Moda Italiana.

She has also had the honor of participating in some of the most prestigious opportunities in the fashion world. Such opportunities include, the first bridal show in China, designed a vestment for Pope John Paul II, organized the first Asia Bridal Summit in Tokyo, and presented her designs at “Donna Sotto le Stelle,” one of the most prestigious shows in Italy, with Chanel, Armani , Missoni, and Etro.

Yumi Katsura is also currently the head of several organizations such as the Federation of Asia & Pacific Bridal Associations, The Japan Bridal Association, Yumi Katsura International, Co. Ltd., & Katsura Yumi Wedding System, Co. Ltd. Katsura, is one of Japan’s and the world’s most prolific designers, whose wedding dresses are considered modern masterpieces. 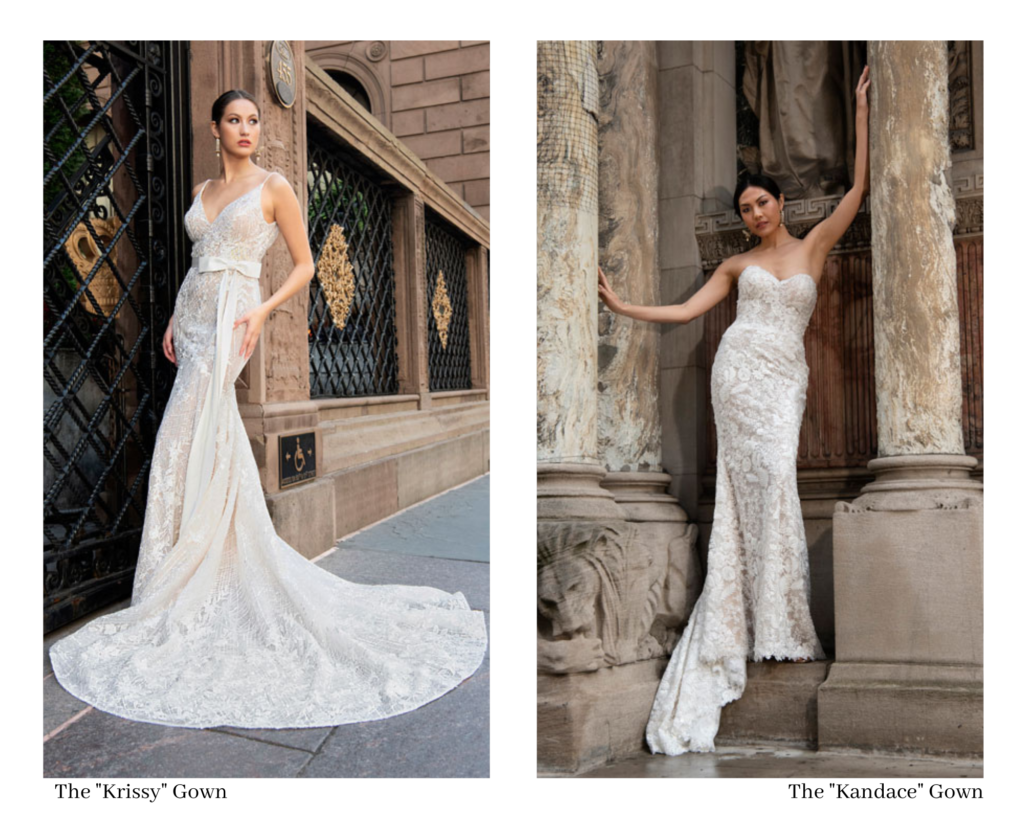 Where do you find inspiration for your collections?

“I find inspiration in many forms; nature, dance, in culture and from various people/personalities that IÂ  know – and of course from the Legend herself – Yumi Katsura. It is such a gift to have been given the unparalleled opportunity to work under the tutelage and guidance of someone who has made such an indelible mark in the fashion industry for over Fifty-five years.â€

“I am also eternally inspired by the story of Miss Ann Lowe, Jackie Os African American wedding dress designer, who was not credited during her lifetime for the masterpiece she created for Mrs Kennedy. A flood in Lowe’s Lexington Avenue workshop 10 days before the wedding ruined the bride’s gown and nine of the bridal-party’s dresses. The designer and her staff worked through eight days (the original time was eight weeks) to reconstruct the gowns and get them delivered on time. Instead of an estimated $700 profit, Lowe lost $2,200 on the project and when they asked Jackie who made her dress – she responded ” A colored lady” As a designer of African heritage, that story will always serve as a great lesson to me on so many levels.”

How have brides changed since you began designing?

â€œThe internet and the on demand availability of information has changed the whole dynamic of the business. The social media sites and the internet in general has saturated the market with images. Brides have become less concerned about “designer” labels and more concerned with the overall aesthetic of the dress and how it fits into their themed wedding! Brides are now coming in to salons completely informed about what they want, how they want it and where they want it from! They oftentimes have better knowledge of fabrications and designer offerings than the sales person helping them! We are also finding that American brides are starting to request gowns in colors other than the traditional white or ivory.â€

Do you have a favorite design you’ve created over the years and why?

Yes, my “Felicity” dress! [Shown below] It is a simple, yet magical lace dress that just manages to look amazing on every body type – it is one that we have done on every spectrum of our size charts and it never gets old!

Our world has changed a lot this year. What are some of the challenges youâ€™ve faced and how did you overcome them?

Oh boy – well let me start off by saying that I lost my beloved husband of 23 years to COVID -19 – so our world has changed drastically. 2020 has been challenging, between the lock down in New York City, the isolation, the quarantine and the fear, the paranoia and basic dread that we have been experiencing have taken a toll on our everyday realities. I have convinced myself that the future has to offer more promise that what we have been experiencing.

Work and creating has always been an outlet and a method of therapy of sorts – so thankfully that has not stopped. Our family continues to put one foot in front of the other to keep it moving – our survival depends on that practical mentality. Our prayers everyday is that we will all progress and that we will survive and thrive against the odds.

What three words best describe you or your company?

We are so excited to showcase some of our new arrivals and favorites from Yumi Katsura at our Designer Event starting October 15th! The detail that goesÂ  into these gowns in unlike anything you’ve ever seen!

Click here to book your personal appointment with us now and receive a special discount off your custom order wedding gown! You won’t want to miss this event!

Our beautiful bride Michelle and her husband David were married on July 10th 2021. Their…

June 26th, 2021 was the most perfect day for Taylor and Jeremiah. Their wedding at…

Please call ahead for an appointment
with a bridal consultant